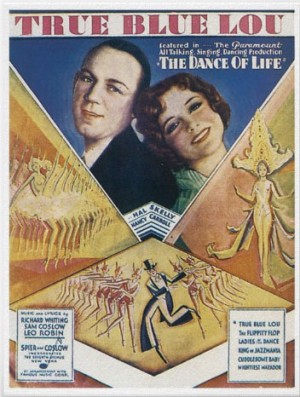 Down in the poolroom
Some of the gang were
Talking of gals they knew
Women are all the same, said Joe

Then one dizzy bird
Said, pal, ain’t you heard
The story of True Blue Lou

Listen and get an earful, Joe
While I remind you she was
A dame in love with a guy
She stuck to him
But didn’t know why

Everyone blamed her
Still they all named her
True Blue Lou

He got a break and went
Away to get a new start
But poor kid, she never got a break
Except the one way
Down in her heart